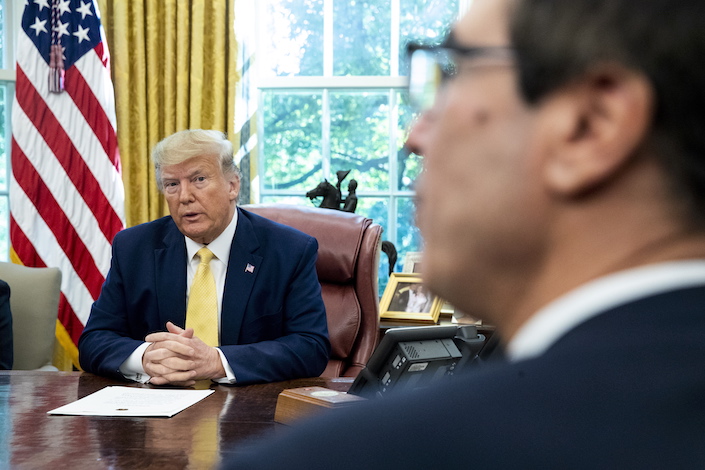 U.S. President Donald Trump promised to deal with the difficulties that Chinese students are having obtaining U.S. visas, denying speculation that Washington wanted to block Chinese from studying in America.

“We’re not going to make it tough, we’re going to make like for everyone else,” Trump said on Friday at press conference announcing that U.S. and Chinese negotiators had reached agreement on the outlines for a partial trade deal. “And China is not going to be treated any differently.

Asked how he could reassure Chinese students, Trump said: “I can give them my word. I want them coming here.”

“We have incredible talent coming in from China. They occupy a big space in our universities and we want to keep it that way,” he said, with Chinese Vice Premier Liu He in attendance.

The Trump administration has enacted limits on visas for Chinese students studying science, technology, engineering and mathematics (STEM) fields to battle what it considers theft of US intellectual property by Beijing. The U.S. State Department has told consulates that Chinese postgraduate students studying subjects that Beijing has prioritized in the “Made in China 2025” industrial policy scheme intended to make Chinese hi-tech industries world leaders – such as aviation, robotics and artificial intelligence — should be limited to only one year.

In June, China’s Ministry of Education issued a statement warning Chinese students to be aware of the risk that their study visas might be rejected. At a press conference in June, Xu Yongji, the ministry official in charge of international cooperation, said education exchanges and cooperation between the U.S. and China had “become complicated” due to the ongoing trade frictions.

However, Trump denied on Friday that the U.S. would implement further restrictions on Chinese student visas. “There were false rumors going on that we were going to close the schools to China. That is so false. It’s just false,” he said.

U.S. Secretary of the Treasury Steven Mnuchin, who was also at the press conference, said he and the president would “follow up” on the issue.

Many Chinese students have reported that their studies have been interrupted this year because of difficulties in getting new U.S. study visas. Many applications have been placed in “administrative processing,” a review process that has no time limit.

According to the 2018 Open Doors report on international student mobility, the number of Chinese students enrolling in U.S. education institutions for the 2017/2018 academic year rose only 3.6%, half the 6.8% increase of the previous year. More than 80% of the college and universities surveyed for the report said that visa delays and denials had negatively impacted their ability to enroll international students.