Appearing at the Texas Tribune’s Tribune Fest, Pelosi stated it’s more important for Congress to uphold its duty of holding the president accountable than maintaining power over the lower chamber. 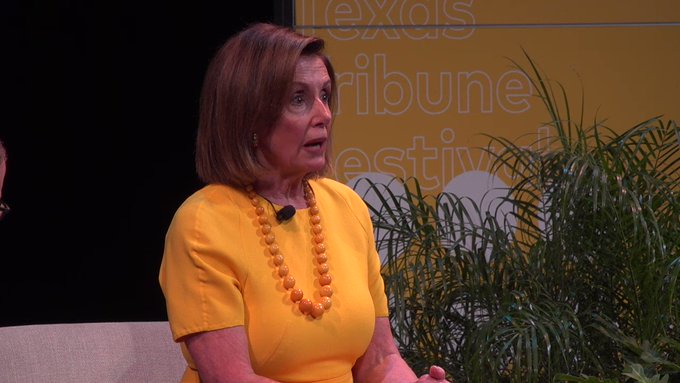 “It doesn’t matter,” Pelosi replied when asked by Tribune CEO Evan Smith if she harbors any “anxiety” over the Democrats’ ability to keep the House if their impeachment inquiry goes awry.

“Our first responsibility is to protect and defend the Constitution of the United States,” said the speaker.

Pelosi’s comments come after the speaker announced an impeachment inquiry this week against President Donald Trump over a telephone call with Ukrainian President Volodymyr Zelensky in which the pair discussed U.S. military aid and the business dealings of Hunter Biden, the son of former Vice President and 2020 White House contender Joe Biden. The July 25th conversation was the subject of so-called “whistleblower” complaint, which according to its author, a CIA officer, is comprised entirely of second-hand knowledge of the call. Additionally, the Department of Justice Office of Legal Counsel’s (OLC) affirmed that the Deep Stater has a bias in favor of a political rival of President Trump. Further, CBS News and Fox News report that the complaint includes inaccuracies, including the false claim charging that Ulrich Brechbuhl, the Counselor to the U.S. State Department, was on the call.

Notwithstanding, in a nod to transparency, the White House released the Trump-Zelensky call transcript on Wednesday. The complaint was published by the House Intelligence Committee the following day.

President Trump lambasted critics of the call in a pair of tweets Saturday, writing: “The Whistleblower’s complaint is completely different and at odds from my actual conversation with the new President of Ukraine. The so-called “Whistleblower” knew practically NOTHING in that those ridiculous charges were far more dramatic & wrong, just like Liddle’ Adam Schiff.”

“The conversation with the new and very good Ukraine President, who told the Fake News, at the United Nations, that HE WAS NOT PRESSURED BY ME IN ANY WAY, SHAPE, OR FORM, should by and of itself bring an end to the new and most recent Witch Hunt. Others ended in ashes!” the president added.